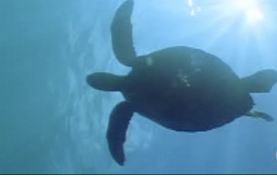 In the style of Joanna Macy, John Seed, and Arne Naess's meditations from Thinking Like a Mountain, where they create a roll call of endangered and extincted species, we can take a moment for the leatherback turtle. We can only hope that this species and the others in the litany of species threatened or gone due to human planetary practices can serve as teachers for us. One part of the article relates the efforts of teenagers in the area to protect the turtle eggs that were still laid, so that they can be buffered from rising tides and baby turtles escorted to the tides after birth.
Posted by Earth Regenerative at 5:11 PM No comments: 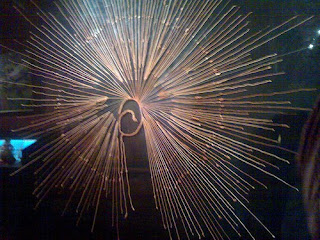 "Alex Wright's Stone Age Information Architecture presentation at the [2006] IA Summit went even further back. Alex looked at the information systems of pre-literate cultures and their significance to today's information problems. And guess what? There are many relevant lessons we can learn from stone-age IA, especially about our own latent disposition toward hierarchy." Wright's work has culminated in this juicy book I want to check out: Glut.

From Wright's site: (Check out how modern web interactions parallel more spoken/oral cultural patterns than print culture... perhaps we are in a resurgence of the ancient communications technoogies and modes that served balanced, pre-agrarian biocultural diversity and co-evolution for tens of thousands of years!)

We tend to give Stone Age people short shrift as systems thinkers. In the popular stereotype, "cave men" are cultural simpletons, too preoccupied with the day-to-day business of survival to pursue the loftier avenues of civilization. Modern literate societies tend to write off these cultures as "prehistoric," drawing a sharp dividing line that relegates them to narrow domains of inquiry like archaeology and anthropology. This bias towards literacy runs deep in our culture; and we tend to bound our questions about modern cultural conundrums to the limited horizon of the last 2500-5000 years. In truth, however, pre-literate peoples develop remarkably complex systems for managing information. My working hypothesis is that those systems hold instructive clues about modern problems of information architecture.

Folk taxonomies provide the most compelling example of how pre-literate people create complex, hierarchical systems to keep track of what they know. Every tribal culture ever studied has created a taxonomy of plants and animals; and as far as we know, these systems stretch deep into our species' past. While these systems vary considerably in the details, they all share a surprisingly similar structure. The key hallmarks of folk taxonomies include: Why do folk taxonomies matter today? One popular assumption in Web circles these days is that old hierarchical systems are doomed in the face of networked information systems, that the emergence of the Internet signals a new order of knowledge that will render the old top-down systems obsolete. But the high degree of similarity between folk taxonomies suggests that we may have a much deeper disposition towards hierarchy - and a will towards consensus - that stretches deep into our cultural past. In other words, rumors of the death of hierarchy may be greatly exaggerated.

Folk taxonomies also provided a basic semantic scaffolding for human cultures to encode layers of shared knowledge: kinship networks, mythological systems, and cultural norms. From the Zuni tribe of the American Southwest to the Wakelbura of the Australian Outback to the ancient Greeks, synaesthetic systems of knowledge took shape around a basic hierarchical template. As Hobart and Schiffman put it: As some human cultures crossed the threshold to literacy, these systems formed the basis for modern constructs of knowledge, like contemporary academic disciplines. But the basic hierarchical template persisted - taking shape as ontologies of knowledge and administrative hierarchies. As literate culture flourished, those hierarchical systems escalated in complexity.

The linguist Walter J. Ong coined the term "secondary orality" to describe the similarity of online communications to older oral traditions (although secondary orality differs from "primary" orality in the sense that secondary orality is deeply bound up with writing). On the Web, a great deal of user activity hews closely to oral modes of interaction - e.g., blogs, email and IM - styles of communication that are constantly shifting, lacking the epistemological fixity of traditional print culture. If we look around the Web today, we can see these two cultures of spoken and written words negotiating an uneasy embrace.

Oral cultures also rely heavily on symbol systems to create bonds of trust in distributed social networks. Totemic objects like beads, bones and cave paintings functioned not just as decorative or ritual objects, but as tokens of information, used to negotiate social relationships, serve as markers of trust, and enable people to forge bonds with each other beyond their immediate kinship circle. Totemic objects thus facilitated a "release from proximity" that allowed progressively more complex social structures to emerge. Today, we also rely on totemic symbols for exactly the same reason. Mechanisms like Ebay trust points, Amazon reviewer ratings, Technorati rankings all give us a means to accomplish the same kind of release: to forge bonds of trust with people we don't know, and to engage in new distributed forms of socializing that don't require the proximity of social encounters.

In conclusion, I suggest that the study of Stone Age Information Architecture offers three central lessons:

End of passage. Thanks Alex!
Posted by Earth Regenerative at 9:37 AM No comments:

Wilderness and Experience as Medicine for Ecological Overwhelm/Abstract Thinking

I know that many people turn from knowing more or looking into the "ecological crisis" because it feels overwhelming to them, an abstract wall of doomsday numbers and nothing/little they can do. I hadn't made the connection with the abstract thinking involved... Perhaps our abstract thinking is sourced in our connection with our bodies, and if we are disconnected from our bodies, we are unable to fully succeed in abstract thinking, or we have become so deracinated from embodiment and corporeal strength that we are "developmentally arrested" before embodiment and abstraction?

It does make sense to me that for many, a personal connection, with discrete processes, lifecycles, hands-on, this round fruit above this particular soil, the way the light comes from the clouds, how the nut casing eases off and roasting then ... becomes our food. Or this particular kind of jigsaw puzzle bark, this avian visitor.... This is spirit and body medicine for the doomsday cloud that hovers over the Western conception of our current occupation (I mean that literally) of Earth. [Humans as an occupying army, shoulder to shoulder, hill to hill, jammed in, tents and tents, our air conditioners and dishwashers are our weapons, the earth is filled with us as an invading army....sorry, rather bleak, I digress...]
Posted by Earth Regenerative at 9:41 PM No comments:

My friend Nicole recently spoke about how experiential education would be most effective when it was woven with the experience young learners have with their families, and how this would build a sense of earth connection.

It brought up a question for me, about how the experiential aspect of young people connecting with earth processes through connection with the family, "bringing it home," would/could interact with families who have been disrupted by poverty or addiction. Is there a case to be made here that part of how we could do multivalent intervention in disrupted families (e.g. the teen gang programs that Multnomah County had designed a few years ago) could include this kind of pro-active ecology/cultural earth-based collaborative learning activity/process as part of the design for the intervention? That the very embeddedness we seek to generate in ecological approaches is the same as the one that would weave and mend families whose relationships, resilience, and capacities have been severely impacted by the consequences of cultures of domination and inequity? I'm sure folks are working on this various places, would love to hear what anyone has heard about!
Posted by Earth Regenerative at 8:57 AM No comments: